The object is to pull the opposing team a distance of four metres.

An Overview of Tug of War

A Tug of War team consists of eight pullers plus a coach and a trainer. The coach is the only person in the arena (apart from the judge) who may address remarks to the team during a pull. All pulls are conducted under the control of a judge. Pulls are best of three, the choice of first end being decided by the toss of a coin. The object is to pull the opposing team a distance of four metres.

To get involved, all that is required is to get a group of people together and a tug of war rope.

A tug of war rope

Find Tug of War Activities Near You 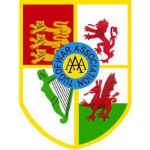